While the Star-Spangled Banner is easily one of the most iconic flags in the world, it has some pretty impressive state flags as well. With 50 states and 50 flags, not every flag is created equal. Some are inevitably ranked better than the rest.

The North American Vexillological Association (an organization of flag enthusiasts) recently came up with a guideline for creating the perfect flag. According to it, a great flag should be:

While the best-ranked state flags don’t necessarily follow all these rules verbatim, they do retain some connection. So, without further ado, here are America’s top state flags!

Maryland’s state flag features heraldic imagery that is reminiscent of the Ye Olde Englishe style. The flag itself is fairly intricate; there are red-and-white crosses on one section representing the Crossland-Mynne family. The other section features a black-and-gold checkerboard which represents the Calvert family, to which Lord Baltimore, Maryland’s founder belonged.

Ranked second is the flag of New Mexico. With its bright red and yellow hues, it tastefully gives a nod to the Spanish conquistadors. The symbol emblazoned on the flag is known as a “Zia” and has been commonly featured on Pueblo Indian pottery. It also represents the sun, with four points radiating outwards toward north, east, south, and west.

Classic in its simplicity, the Alaskan flag features the North Star and the Big Dipper constellation. The flag is successfully able to invoke the image of the expansive night sky on a frosty Alaskan night. The flag is admired so much so that the state song of Alaska is named after it: “Alaska’s Flag.”

Evoking a breezy Caribbean vibe, the South Carolinian flag features a crescent moon and a palmetto. The white objects contrast starkly with the deep blue background and make for a classy flag!

The Arizona state flag features a copper star, which is a nod to its most important natural resource, and 13 rays behind it, which represent the idyllic Western sunsets, Imperial Spain, and America’s original colonies.

To some, the Colorado flag may seem eerily similar to the popular arcade game Pac-Man. But of course, that is not so. The red represents the iconic rocks and soil of the state, while the white represents the snow-capped mountains. The yellow in the middle of the red is symbolic of sunshine while the blue background is the azure sky.

Known as the ultimate American flag store since 2002, we stock a wide range of flag products, including American flags, commercial aluminum flagpoles, light pole banners, and retractable banners. We also provide custom printed flags with business logos to help market your business for a minor cost. 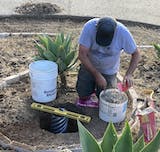 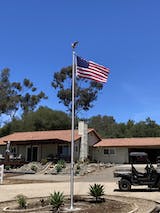