Furnish Your Property with a Stunning Commercial Flagpole

A commercial flagpole, which may also be known as a flag mast, is often made from high quality aluminum, steel or fiberglass. These poles are typically found outside schools, businesses or other properties, and are used to commemorate certain events, ideas, or places.

Flag poles may be a single piece or they may be comprised of multiple sections, and can reach a height of 100 ft. or more. They are tapered cones and will have a durable finish which has been anodized. The best flag poles also have a high wind rating, and can withstand wind speeds of up to 255 mph.

On all commercial flagpoles, the flag will be attached to the lower part of the halyard, and will be raised by pulling on the opposite side. The halyard must be tightened and attached to the base of the pole. Flag poles will typically have a flat plate near the top called the “truck,” and it they may also have a finial, (a ball ornament or an eagle) which will adorn the top of the pole. Some commercial flag poles will feature two pulleys and two halyards for flying two flags at the same time.

One or more pieces of taper will typically be used, in the construction of a flagpole. Some commercial flagpoles feature an external halyard system, while other commercial flag poles may utilize an internal winch system which is attached to a shaft, which is turned using a removable crank handle. On internal halyard systems, the steel cable unwinds from the winch and will move inside the pole, over the truck sheave and outside the shaft.

A counter weight, which has a neoprene coating, is connected to the the halyard and a retainer ring. This gives the halyard the ability to descend, which allows the flag to be attached or removed. Internal halyard systems are also good because, once raised, they cannot be touched by unauthorized users.

Flag poles come with a number of different accessories. These accessories will typically either enhance the appearance of the pole, or will make it easier to operate. Many models will come with a revolving truck made from cast aluminum, a cable assembly, counterweights and retainer rings, and a foundation sleeve which is made from galvanized steel. Another important accessory is the M-winch, which is a gear less device that can lock itself, which reduces the need for a brake.

Very tall commercial flagpoles will require the use of a crane during installation, which is costly.

Thank you so much... could not set sail without our Flag!

not as bright as I would hope for, but still worth it hope you develop something brighter 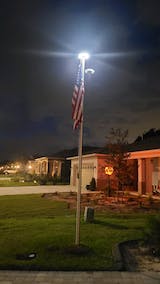 The flag arrived on the date promised. It was packaged very well and the quality of materials can’t be beat. Vibrant colors and flies with the slightest breeze. I have it on a 25’ one piece aluminum flag pole that I also purchased from federal flags. Beautiful!