Knowing how to properly fold an American flag ensures you appropriately retire it according to the Flag Code when the time comes. Often flag folding occurs on special occasions at ceremonies, and each of the 13 folds has a different meaning. Although the Flag Code isn’t legally binding, it does lay out social expectations and norms for all to follow out of respect. Use this step-by-step guide the next time you need to retire your flag.

Step 1: Lay the Flag Out

While you can do this independently, it’s easiest when done with two or more people, especially because you don’t want it to touch the ground. Begin by having the individuals hold the flag on each corner so it appears flat and facing upward.

Now that the flag is outstretched, it’s time to start folding. Follow this step-by-step guide on how to properly fold an American flag and perform the following steps:

After folding the flag, you may still see the hem along the blue field. Should this happen, you can hide it by tucking it inside the fold since it forms a small pocket. This allows you to showcase your now-retired flag and all its beauty. Remember, the folds symbolize many things stretching from life to remembrance to honor for the armed forces.

Once you’ve folded the flag, showcase it in a flag case or box, then present it to the recipient—often a veteran or their family. One common location for flag folding is at the funeral of a veteran. The flag holds a different meaning to all people, and by respecting it, we also respect these beliefs. If you’re shopping for a high-quality American flag or flag-related accessories, consider Federal Flags. Let your flag fly high!

I purchased this flag for my husband to fly in our front yard. It is well-made and viewable from both sides. We love it!

Item was as advertised. Worked great.

Order was placed and pole arrived very quickly despite delays due to Covid. Install process was straight forward and easy to understand. Pole looks great in its new location. Very good customer service. 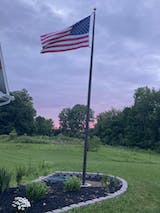 Just got it up. Seems to be great.

Have not stood up yet. A few other projects in front of standing it up. Hardware looks well made. Top Cover was bent but we were able to fix to original condition. Would like the opportunity to review after it is erected. If all goes well i will be purchasing two more for the property. Thanks for the persistence, i believe it will be a great addition to our place.