When it comes to setting aside days for American patriotism, Memorial Day, Veterans Day, and, of course, the good old Fourth of July get all the attention. But there’s another day each year to observe the history and symbols of our nation: the 14th of June, better known as Flag Day. The anniversary of the Continental Congress’s resolution to recognize Betsy Ross’s design as the American flag is a day for reflecting on the freedoms and sacrifices the American flag represents. It also slots nicely between Memorial Day and the Fourth of July as an opportunity for the most American of traditions: the summer cookout. Here’s a short look at the fascinating history behind Flag Day.

Like many developing traditions, Flag Day wasn’t immediately a runaway success. The first attempt at commemorating the flag on the anniversary of its ratification was in Hartford, Connecticut, in 1861. However, Hartford did not hold a similar observance in 1862. But in 1885, in the small town of Waubeka, Wisconsin, dentist and schoolteacher Bernard Cigrand added a third occupation to his résumé: popularizer of Flag Day. Dedicated to his cause, Cigrand traveled the country advocating for Flag Day and even published a magazine, The American Standard, which he used to promote the concept of Flag Day in what one could consider a 19th-century analogue to this Federal Flags blog.

On its way to official federal observance, Flag Day took some detours. In 1913, the city of Paterson, New Jersey, declared the 17th of March to be Flag Day as a counterattack on striking textile laborers, implying that workers who organized under red labor flags were unpatriotic. The Industrial Workers of the World, in response, continued their organizing efforts with American flags in tow, charging that there was nothing unpatriotic about their struggle for safety and dignity in the workplace. This bad-faith approach to Flag Day did not find purchase beyond Paterson in 1913.

World War II changed a lot of traditions on the home front, and the observance of Flag Day was among them. In 1942, President Franklin D. Roosevelt rechristened Flag Day as United Nations Day, a celebration of solidarity among the United States, the United Kingdom, and the Soviet Union—the allies that would go on to form the United Nations we know today. United Nations Day stood in for Flag Day through 1944, after which the May 1945 surrender of Nazi Germany would revert the day back to Flag Day. United Nations Day continues as an October holiday, celebrating the establishment of the supranational governing body that formed after the war.

Got my Eagle flagpole topper in very good time. It looks great and I have had many complements on it. Thank you.

I sent the two pirate flags to friends. They loved it. One of them wants a larger American flag to fly on the same flag poll. “ Must be Larger” and the same or better quality. What do you recommend? Tim

Because we live in a windy area, I do a zig-zag stich over all the fold edges. It helps greatly to increase the length before fraying.. The Flags are beautiful and with that tip, last quite awhile.

Our company is very please with this product . The balls were mounted on flags on one of Trinidad Gov't building .thank you Fereral Flags , will definately recommend and purchase again 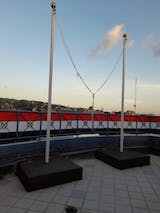 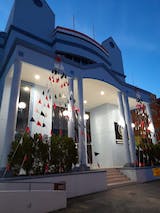 I ordered the 5x8 2 ply polyester flag and am very satisfied with the quality. It is heavy duty and, indeed, the colors are deep and rich as described. I am also very happy with the customer service department. I contacted them to inquire about the weight of the flag and was impressed at their quick response and advice. I received the flag sooner than anticipated. The flag is heavier than most and requires a bigger wind to fly; however, that is not an issue for me since my flagpole is exposed to a wide-open area. I wish it had 3 grommets as opposed to two, but that would not prevent me from purchasing it again in the future.