Maybe you read about it. A California school, in May of 2010, enacted a temporary ban on students wearing t-shirts featuring the American flag to school. Those who had chosen to wear an American flag that day were told to either turn them inside out or remove them completely. The reason? It was “Cinco de Mayo” - the 5th of May - a day that has become prominent, mostly only in the United States, as a celebration of a famous battle in Mexico.

That it was the celebration of another country’s history (and a somewhat contrived one at that) seemed to slip past the school administrators. Given the school’s history of racial and gang violence, the administrators decided that the children who wanted to celebrate Cinco de Mayo should be allowed to, while the kids who wanted to express their patriotism by wearing American flag t-shirts should be suppressed. This, the administrators said, was intended to “keep the children safe” by reducing the risk of violence.

Were they right in taking this course of action? A California appeals court thought so. The American flag shirt-wearing children and their families filed suit against the school administrators claiming infringement of their constitutional rights to free speech. On February 27th, 2014 a California Appeals court ruled that the defendants – the school and two administrators – had not, in fact, infringed the students’ rights. Further, the court felt that the school had acted appropriately to avoid violence and protect the safety of students and to insure the orderly progression of school activities that day.

But since when is appeasing the potential perpetrators of violence (whether directly threatened or merely implied) the right course of action? In particular, how is it proper or advisable to give in to a group of kids from another country who are celebrating an occasion mostly contrived by American marketers, because they might start fighting with kids who are wearing the national flag of the country in which all of this is taking place?

As many may realize, school students are not entitled to unfettered exercise of their constitutional rights. For example, students do not have the right to bear arms at school. And, as stated above, the appeals court ruled that the school administrators could, in fact, curtail the students’ rights of free speech by making them turn the American flag shirts inside out or take them off entirely. So, unless the affected students decide to take their case to the Supreme Court, the legal part of this case has been decided.

But let’s look at the situation from a non-legal perspective. When you boil it all down, what you have is a situation in which school administrators were cowed by threats of violence by a foreign group of students who wanted to celebrate an essentially made up holiday. By attempting to appease those students, school administrators have taught every student in the school some damaging and unfortunate lessons.

At what point will the school administrators stand up to this? Or will they ever? If they don’t, the situation is likely to get worse – for everyone involved. And what about ripple effects? Will other schools and other racial or gang-related groups see this and make their own bid for winning through intimidation? Will those kids who were forced to submit, those who are the future leaders of our country, become conditioned to accept appeasement as a viable option in the face of unreasonable threats?

In the long run, this school’s administrators made a simple, but profound error in judgment. They have, in effect, pre-punished kids who wanted to display the American flag on their clothing because of the violence that might incite. They’ve shifted blame for potential future violent acts from the perpetrator to the provocateur. And they’ve encouraged more frequent and more dangerous future threats.

It’s a complete bastardization of all that America stands for.

We can’t think of a more wrong-headed signal to send to the young people of our country. But inasmuch as the actions of this school will most probably encourage future threats of violence from these same groups, these administrators may soon learn that they’ve only delayed dealing with the problem correctly. They have by no means solved it.

Perfect for what I wanted. Let's see how long it lasts.

Great colors and detail. Flying for a month now and all is well

Been flying for a month now, so far so good.

Due to rain and other deterrence's we were finally able to install our new flag pole a week ago. The photos on the website are nice but to see the product standing is a great site! We could not be more pleased and have already received compliments of how it looks in front of our church building. Two of us were able to prepare and install the pole just in time for the Memorial Day week-end. Thanks to the Federal Flags team for a great product and support team in getting it here in a couple of weeks! (Just a note to say that the power lines in the photo are farther away than they appear!) 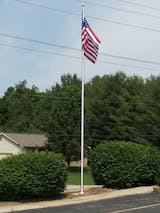