A (Very) Brief History of Maryland

April 28th in history was recorded as Maryland Day. The land was governed with by the Calvert family under the feudalistic system. Maryland gained its importance as one of the few Catholic Dominant regions in the English colony.

The main export crop of the land was Tobacco. The state has braced a number of battles since its inception. In 1814, the British waged a war to capture Maryland; the war that compelled Francis Scott Key to write the words “The Star-Spangled Banner”. In 1870, the British fought the Maryland Army eyeing the Baltimore harbor, but they suffered a defeat and retreated.

Maryland’s flag reflects the symbols of Calvert and Cross Land families who were the first settlers of the established land of Maryland. The first and fourth quarters of the flag belong to Calvert Family which was the Lord of Baltimore while the second and the third quarters reflect the identity of Cross Land Family the maternal side of George Calvert.

The flag was first staffed in 1880 at a parade marking the 150th anniversary of founding of the city of Baltimore. The Baltimore flag was later on officially adopted as the state flat in 1904.

A (Similarly Brief) History of Louisiana

Man has known to inhabit the now called state of Louisiana over a hundred centuries ago. European influence is said to have begun in the 16th century when the state of Louisiana became a French colony. During the European colonization, some of the groups that inhabited the land include The Choctaw nation, The Natchez Nation, The Caddo Confederacy and the Atakapa. During the late 17th century, France had to release the land east of Mississippi to Great Briton while the area around Louisiana came under the possession of Spain.

The Louisiana Flag depicts symbol of Christian Charity showing the famous “Pelican in her piety” portrait along with a ribbon stating the motto of the land which is “Union, Justice, and Confidence”. It was a tradition in the 19th Century to have three drops of blood on the “Pelican in her piety”. However, this tradition was haphazardly followed.

This was noticed by an eighth grader who brought this to the attention of the state legislature. In April 2006 a bill was passed and the issue was resolved. The latest revision of the flag was done in 2010 featuring detailed features of the Pelican and removing

The purchase and delivery went as expected with no surprises. The believery company was very helpful and the communication was excellent. The pole came in about two weeks. The install was not complicated. I would recommend a 5 by 8 flag.

Thie issue was resolved immediately. I got a call back within the hour. Very satisfactory. 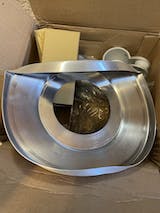