One reason why nations have flags is for representation—people living under that flag often feel connected. US states have their own flags for similar reasons; each state had a history before it joined the Union. Learn why each state has its own flag and uncover a little more about America and the states’ history!

One reason why each state has its own flag remains tied to history. Before the United States annexed the various states, they were territories that acted on their own. Each of these territories had its own set of laws. So, for many states, their flags are symbolic reminders of their history and what the states were before becoming a part of the United States.

Each state has a different design on its flag, which represents the state in various ways. For instance, the flag may feature certain geographical elements, historical dates, or animals. Moreover, every flag emphasizes certain colors and symbols, often due to the state’s history.

Members or groups of the state typically designed its flag, and in some cases, statewide contests decided what design was best. This adds to the flag’s importance because it represents the connection between the citizens.

Take a look at the Alaskan and Californian state flags to spot the similarities and differences in their symbols.

Alaska’s state flag has stars, though not as many as our national flag, nor in the same pattern. The state acquired its flag design in 1927. Interestingly, a 13-year-old boy designed Alaska’s state flag. It depicts the star Polaris and the Big Dipper with a blue background. The background symbolizes the sky, the ocean, and the state flower, the forget-me-not. The North Star represents Alaska’s future, and the Big Dipper, also known as the Great Bear, represents strength.

The Californian flag has a grizzly bear on it, and like the Great Bear constellation on Alaska’s flag, it stands for strength. The symbol was important to California, as it used its flag to declare independence from Mexico in 1846.

Just like the American flag represents our nation, state flags serve as symbols of each state. Often, these emblems are important because of their connection to the state’s history. By knowing why each state has its own flag, you can begin recognizing what each flag represents. With knowledge comes understanding, and with it, unity. Some of us may be states apart, but we’re all connected under one national flag.

Are you looking for the perfect flag to show off your state pride? Federal Flags has US state flags for sale!

Beautiful flag to see waving at you.

A
Solar Powered Flagpole Spot Light - For Flagpoles up to 60ft Tall Albert Kaufmann
Spot on!

Dos a good job for a small light.

2nd flag pole I ordered. Everything made in USA!
Lena .. did a fantastic job both times with my order.
Thanks! 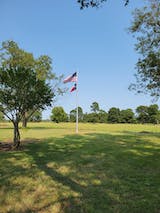 We love our new flag and it flys beautifully at our front door.
We appreciate the heavy duty quality that stands up to the wind and rain.
We are proud patriots and love showing the colors’🇺🇸