Americans have accepted many of the stories and beliefs surrounding the flag as truth; however, some of these are inaccuracies or misconceptions of true expectations. Start learning the most interesting myths about the American Flag and the reality behind them!

Flag Code Is the Law

While many people follow US Flag Code, there are no legal requirements to do so—these are simply guidelines to ensure individuals respect the flag and those who fight for our freedom. For example, US Flag Code advises against wearing the American flag, though many articles of clothing allow for this, especially around the Fourth of July.

Although US Flag Code states that the flag should not touch the ground, that does not mean you need to destroy it if it does. In truth, US Flag Code only advises destroying flags when they’re in poor condition; for example, if the flag tears, you should properly dispose of it.

Rather than destroy a flag that touches the ground, properly clean it by washing it yourself or taking it to a dry cleaner, as both are more suitable options than burning a dirty flag.

Burning the Flag Is Illegal

Flag burning is not illegal, but many Americans still see it as a sign of disrespect and find it offensive. Since June 21, 1989, burning the American flag has been legal and remains protected under the First Amendment—the freedom of symbolic speech preserves this right. For this reason, some may burn the American flag during protests as a symbol of their right to free speech.

Betsy Ross Made the First Flag

Of the many stories surrounding the flag, one of the most interesting myths about the American flag is the story of Betsy Ross. Many Americans know the legend of Betsy Ross sewing the first American flag after George Washington himself enlisted her assistance as a seamstress; however, this myth is likely untrue, as there’s little to no evidence of it.

,The American flag symbolizes independence and freedom to many and knowing the truth about it allows you to better understand and respect the flag. As you begin searching for ways to show your patriotism, buy American Flags from Federal Flags for a high-quality flag you’ll proudly fly high. 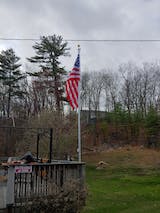 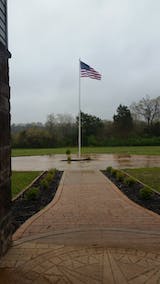 Excellent product. Very satisfied with the pole. Only complaint was the delivering carrier did call the day before delivery as instructed. 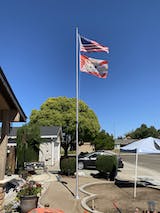