State Flag of California, History, and Where to Buy It

The official state flag of California is a bear flag with a red star on the top left side. So what is the story behind this bear and where can you find it for your campaigns?

The town in question was called Sonoma and the revolt was led by rebels who mostly consisted of murderers, thieves, and mostly drunks. The revolt was against the Mexican government where the protesters proclaimed California as a free independent and republic state.

The bear flag became the state flag of California, a strong symbol for an ever changing and diversified state. It has become a symbol that has been used for over a century now.

The grizzly bear that appears on the state flag of California sadly is nowhere to be found in the state of California itself. You can however, find it on flags and campaign related accessories on Federal Flags website. The California Flags are available in 3 different sizes namely 3' x 5', 4' x 6' and 5' x 8' and prices start from $32 only. There are bulk discounts available in case you are feeling patriotic and want to buy in bulk for your friends and family members.

Here are some of the features and qualities of the flag that you can buy easily on Federal Flags online website:

As it is the official flag of the state of California available on Federal Flags, it features a grizzly bear moving in the left direction, a red star on the top left corner, and a red stripe at the bottom. Federal Flags has done a great job of manufacturing this flag using top quality materials and state of the art stitching. The flag is 100% made in the USA with no part of it outsourced. The colors are sharp, deep, and rich.

Very easy to install and keeps the noise to a minimum.

Got my new pole, had to wait two weeks for the weather, but finally got the pole and landscaping done 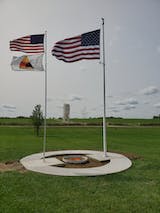 Let me start this off by saying, I looked at flag poles for a month before I decided to buy. I looked at the big warehouse stores, home improvement chains, and I even considered building my own from materials from the local metal store. I live in Eastern New Mexico, and our standard day breeze is anywhere from nothing to 25 mph, gust reaching upwards of 70mph. After reading thousands of reviews and looking at pictures and debating on a single section, or a multi-section pole, or breaking down and figuring out how to reinforce a "cheap sectional pole" that you can get from any of the big chain stores or online mass retailer. Those range from 99 bucks to a couple hundred. Most of the pictures showed a great looking pole, but they have a major flaw, sidewall thickness. They are good for places that get the occasional light gust, but they wouldn’t stand a chance against NM wind. After deciding on the sectional commercial grade 20ft pole, I was still skeptical about it until it showed up.
Packing was great, couple of small holes in the box but they were nothing to worry about. After flying through the instructions that are very well laid out, I inspected the sections. Thick and sturdy, very well tapered to fit together nicely. I used a 12” concrete for cut at 2’3”, 3 ½“s of pea gravel in the bottom 2 layers of blue painters tape on the bottom of the sleeve, and 160lbs of concrete mix. Leveling the sleeve while the concrete was going in. The sand in the sleeve holds the base sturdy. Standard home maintenance skills will suffice for the install. The only tip I can give to go with the instructions is to use 2 blue painters tape to put on the slip joint t snug up the fit just a little. My neighbors are all envious and have asked where I got it. Believe me I told them. And any other flag pole that I purchase in the future will come from Federal. 4x6 and 3x4 1/2 flags flying.

Thanks for the flag and pole. It looks great and I'm anxious to get it installed. It looks and feels a lot more sturdy than the last one that was destroyed in a wind storm. I'll let you know how we do.

Got my flag here in good condition, no wrinkles.