Ever eaten out of a paper plate with the US flag on it at a Fourth of July picnic? Well, you just defied the US flag code. Turns out, it’s actually pretty easy to be in disrespect of the Star-Spangled Banner, thanks to the often-obscure flag code.

NFL athletes made national headlines recently when President Donald Trump accused them of disrespecting the American flag by kneeling or sitting in protest while the national anthem played. Since then, people have started to question what does disrespecting the flag mean really, and are you disrespecting it unknowingly?

Let’s take a page out of the flag code to see what behavior counts as disrespect.

Have a favorite tee or swimsuit featuring the flag that you proudly wear every Fourth of July? Turns out, your well-intended patriotism is placing you on the wrong side of the law. Perhaps, it’s time to put away those American flag bikinis, bed sheets, and draperies.

Drawing or Writing On the Flag

“The flag should never have placed upon it, nor on any part of it, nor attached to it any mark, insignia, letter, word, figure, design, picture, or drawing of any nature.”

This one is a no-brainer; writing text or drawing graffiti of any kind on the flag is considered disrespectful. The flag should remain untainted so it is best not to mar its appearance with any drawings or letterings.

“It should not be embroidered on such articles as cushions or handkerchiefs and the like, printed or otherwise impressed on paper napkins or boxes or anything that is designed for temporary use and discard.”

Sorry to rain on your parade, but time to put away the disposable US paper plates and cups for your Fourth of July and Memorial Day cookouts. The plates may be perfect for holding that juicy burger, but it has the US flag on it and the code mandates that that’s disrespectful.

The Flag Should Never Lie Flat

“The flag should never be carried flat or horizontally, but always aloft and free.”

Have you ever seen those massive American flags, almost as big as fields, held during national games? They might not be as flag-code friendly as you’d think. With high chances of the flag touching the ground, in addition to it being laid flat instead of flying in the air, all amounts to be a tad disrespectful to the sanctity of the flag.

“The flag should never be used for advertising purposes in any manner whatsoever.”

Using the national flag to sell a product is also considered disregarding the virtue of the flag. And if the flags are printed on disposable fliers, that’s doubly offensive.

So now you know what may or may not be counted as disregard when it comes to the US flag.

If you’re looking to buy high-quality American flags, we at Federal Flags offer a wide range for you to check out! From custom-printed flags to retractable banners, we have it all!

Before I say anything about my flagpole I want to say what an amazing staff federal flag has in the communication that they do with their customers is absolutely amazing. Now moving onto the flagpole itself it is the best flagpole I have ever bought. Hands-down the best for the money. Extremely happy at 110% recommend this to anybody.

I received my US flag sooner than expected which was appreciated! The high quality and workmanship of the flag were a pleasure to see. I will definitely keep you in mind for my next replacement purchase.

B
25 ft. Commercial Flagpole with External Rope Halyard Rated At 113 mph B.L.
My birthday present for myself

Beautiful. Heavy duty looking but easy to erect. Search "flag pole installation" on You Tube. We live in Manteca, California completely across the country from Atlanta and our delivery tube arrived dented so we pulled out the pole and because the packaging was so strong there was no damage to the pole. We are HAPPY.
Note: you only need 1 @ 50lb bag of sand (I bought 3). 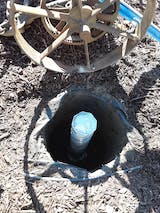 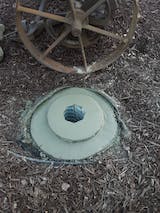 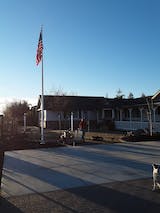 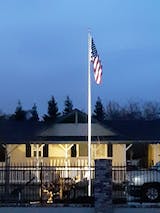 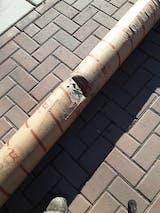