The Symbolism of the American Flag

The flag of a country is considered to be a representation of its culture and values. The American flag’s concept and design was established in the year 1777. Since the beginning, the flag was to consist of 13 horizontal stripes in red from top to bottom with a rectangle in blue containing small white stars. At present, there are 50 stars on the flag. There are many nicknames that are used today to refer to the American Flag such as, Old Glory, Stars and Stripes, and the Star-Spangled Banner. In this article, we will discuss some of the important features of the U.S. flag.

Colors and their Meanings

The colors that have been used in the U.S. flag also hold special importance and are considered symbolic. The white in the flag represents innocence, the red is a representation of courage and bravery, and blue is used as a symbol of justice and determination. All of these colors are considered to be an essential part of the complete meaning of the flag and are used together in order to send a message of a strong nation.

Description and Meanings of the Images

The stripes on the flag are seen to be a representation of the 13 Colonies that got independence from the Great Britain and the 50 stars on the current design reflect the 50 states of the country. The current flag with 50 stars is the longest version in use till now.

Changes in the Design

To date, 27 modifications and changes have taken place in the flag’s design since the year 1777. The changes can primarily be attributed to the change in the number of stars that was seen to be a reflection of the number of states admitted. The current 50-star design was adopted in 1959 and has been in use since then. The horizontal stripes increased in number to 15 from 13 from 1795 to 1818 after which the number returned to 13.

The American Flag reflects a subtle message of courage and bravery shown by millions of Americans. It holds the inspiration from all the wars and battles fought by the courageous individuals. This is the main reason why it is considered to be a source of pride and confidence for many citizens and is held dear by all the individuals residing in the country.

The one piece pole is great. Should last. The freight company was the only thing that sucked on this purchase

We ordered the 25ft commercial sectional flagpole and light topper for our lake association. The product arrived quickly and was packaged so as not to be damaged in transit. We followed the directions and the flag was being raised in no time!!! I would definitely recommend this flagpole, and solar light is REALLY bright!!! 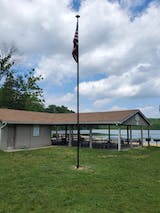 Our pole didn’t come with a external halyard rope.

This is a strong, beautiful flagpole. As another reviewer advised, do not underestimate the manpower needed to hoist this flagpole. Four strong persons are needed, and more would be better. The instructions for the foundation are well-written. I used approximately 1.5 cubic yards of concrete.
For reference of the pole:flag ratio, the 35' pole pictured here has (1) 5'x8' flag, and (2) 4'x6' flags, spaced 6" apart.

Still waiting for delivery. This flag pole has been paid in full and no
site of flag pole or flag.
We did receive the Eagle, but nothing else.
Not happy.
Was over 4000.00.

Where is our flag and flag pole?
I have called 2 times and each time they said it should be here at the
end of each week and that was 3 weeks ago.